A WEEKLY URBAN EXCURSION IN CORONA TIMES - PARIS IN SEPTEMBER 2021 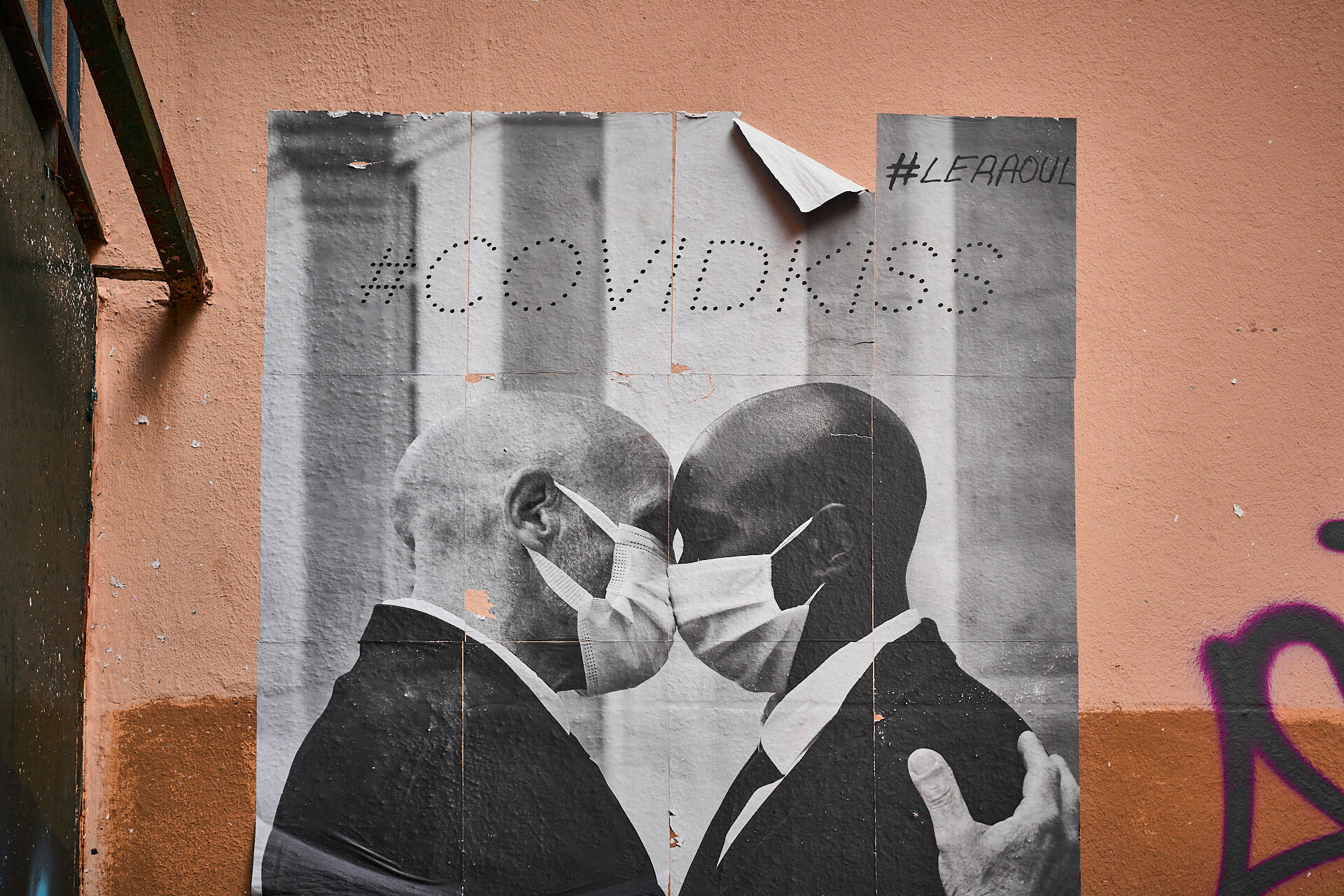 Already postponed last year due to Corona, but now it has finally worked: Our photo city trip to the capital of France. Six days in Paris together with Hanno, our friend, who was able to try out his brand new, super small, handy and extremely sharp photographing Sony RX 100 VII. Eight days of travel full of sun, clouds and blue skies. How lucky we were in the city of love. We stayed at the Motel One Paris Porte-Dorée, a pleasant hotel on the edge of the "inner circle" of the city with the best metro connections in all directions. Inexpensive, clean, friendly, with underground parking. All the best.

Yes, yes, the time-honored metro. If it weren't here in Paris! From Monday to Sunday we had treated ourselves to a week ticket and have rushed a few hundreds of kilometers criss-cross below and above the huge city. Plus the trip to Versailles. Every metro station brightly painted and sparkling clean. Strange but true. If you compare this with New York or Berlin and their subway stations, which are mostly dirty and walls completely daubed ...! Despite the very numerous metro lines and underground entrances and stairs, they are ingeniously signposted and easy to understand. Real for everyone - even without knowledge of French - to understand.

And then the driving rhythm. Every lane every 3 to 10 minutes. Everyone wears a face mask. Without exception. And then sometimes very individually designed station: for example in the Opera metro station. There the upper edges of the tiled walls are adorned with small black figures and scenes. So cute. And everyone has something to do with music there. Not all metro stations in Paris are tiled in white - some have a special design and the most unusual is probably the "Arts et Métiers" station: On the platforms of metro line 11, you get the impression of being in the Nautilus from Jules Verne's novels. Because the station is completely lined with copper plates and there is a row of "portholes" on the sides that show small scenes from technology and science. A kind of a machine with several huge wheels hangs from the ceiling, reminiscent of the Science and Technology Museum Arts et Métiers, which is not far from this metro station.

Despite over 30 degrees of heat, we did not let ourselves be stopped from scrubbing a lot of kilometers: 16.6 km per day on average. For us not so very young people a very good result, isn't it ?! Even though we really used the Paris Metro everywhere and often. But that's probably what photographers are like. Of course, there were plenty of little breaks in the omnipresent, romantic street cafes or bistros. We love this sitting on chairs outside facing pedestrians, shops and traffic. So you can watch and make nasty remarks to everything and everyone with a delicious coffee, cider or beer in your hands. All in all, we ran our feet flat and were then righteously done in the late afternoon. It did well anyway.

ENGLISH IS NO LONGER A PROBLEM

The French and their love for the English and the English language. It is actually hard to believe, but the French neighbors have overcome each other: They now increasingly speak the well-known world language called English. It is a boon for all of us when we are not at all able to speak French apart from two whole sentences. And so you can now properly communicate with the French in the capital. What probably caused this turnaround? The realization that after the Franco-British disputes of the past centuries you can change in the right direction and push your own national idea a bit backwards ?! It must have been something. In any case, we no longer think about this fact and are only happy about the overall international result.

Many do not know it, but there really is. A sinking house in Paris. Well, if you've been to Paris in the Montmartre district, you may have walked past the house without realizing that it was sinking. The reason is simple: this is an optical illusion. There is a “gras slope” near the house. If you turn the camera a little so that the gras line is perfectly horizontal, the building in the background will begin to sink. Even better if people dare to climb over the fence and walk up the hill.

Tourists often ignore the 13th arrondissement of Paris. It is true that there are mostly ugly skyscrapers, but there is a pearl in between: the Butte aux Cailles district. Cobblestone streets, cozy bars and street art on every corner promise an interesting evening - and interesting photos.

A former iron foundry has been transformed into a huge, digital work of art. Famous images come to life and wander over the walls, floors, pillars and visitors. To music, the hall with the industrial charm is transformed into a magical world. We saw the "exhibition" about Dali there, wonderfully combined by Pink Floyds music. A hammer! The Atelier des Lumières is in the east of the city, not far from the Père Lachaise cemetery.

Parc de la Villette is the largest park and the second largest green space in Paris. It is located in the 19th arrondissement and is crossed by the Canal de l’Ourcq. The 35 hectare facility, designed by architect Bernard Tschumi, opened in 1983. It is really a delight in (interior) architecture and art. It's great fun to explore this park with its great buildings and sculptures. A real paradise for photo motifs. The park is open to the public at any time of the day or night. Great shadow formations from the buildings and beautiful effects in the reflection of La Géode, the huge mirror ball, which by the way houses a 3D IMAX cinema. You should definitely visit the "Cité des sciences et de l’industrie", the largest popular science museum in Europe, 300 meters long. Have fun and bring your time!

What a difference! At least what is coming now applies to mid-September 2021. Regarding to corona checks at restaurants, bistros, etc., the capital city has positively surprised us. Because at almost all locations there was strict inquiries. No matter whether with a French or European Covid app. Before you could even sit down. We didn't remember that in our own country. So hats off to you French! You are a good role model for Germany

The capital of France. Olympic city 2024. With more than 2 million inhabitants and over 17 million tourists per year. You'd think there's a lot of garbage there. Similar to some days in New York. But believed wrong! None of this can be found in or on the streets, alleys and parks of the big city. It's squeaky clean. Strange but true. Praise to the residents and the garbage disposal there. As in the press and media in April 2021 during the Corona lockdown, "Bulky rubbish on the streets, overflowing garbage cans, a rubbish dump in the open air. A debate is raging about the untidy metropolis of Paris." But the city is fighting against its dirty image. It had no choice but to do much, much more about the garbage. The municipality has doubled its budget for cleanliness and city cleaning to one billion euros per year. There are now thousands and thousands of garbage bins in public spaces. They are even rat-proof and inaccessible to the annoying rodents. And you can already see the success after six months. At least that's what we mean.

Of course we wanted to see him again. To the most famous tower in France. Run down through his steel feet. Our aim was to put it in the limelight, photographically. From further away and from very close. For example from the Trocadero viewing platform and the stairs in front of it: Unfortunately not. It is a huge construction site with a wooden fence that prevents the wonderful view. Standing directly in front of the tower and looking up behind it. But nothing came of it. Because: The Eiffel Tower is currently a big construction area. And underneath it is no longer accessible without a not cheap entry ticket. Instead, we photographed him on the beautiful, 237 m long Bir-Hakeim Bridge. It is exactly the right distance from the Eiffel Tower so that it fits perfectly in its full size on the picture. The nocturnal illumination of a so-called light artist is unfortunately nothing special either!

It has actually never been any different in Paris. What you have to pay out for a pizza, a bottle of wine or a glass of freshly tapped beer is not exactly cheap. Not to mention a menu - which is so often offered in French restaurants. You can quickly get away with three people after the evening dinner including drinks 100 to 150 Euros .. And without having had a first-class meal. Our Motel One on the outskirts of the city center made a notable exception. 125 euros for a double room with breakfast, underground parking and with the best metro connections in Paris is acceptable, right ?! The Motel One Paris-Porte Doree is worth recommending. Oh yes, there is a second exception: the Metro weekly pass "PASS NAVIGO DECOUVERTE" for 32.80 euros (Monday to Sunday). The pass is valid for zones 1-5. It can therefore be used for all airport transfers (Charles de Gaulle or Orly) by public transport. You can also go to all the sights outside Paris (Versailles, Disneyland, etc.). You can get it at all subway counters (also at the RER station at the airport) on presentation of a passport photo that is attached to the passport.

In any case, it was once again an experience to be able to spend a few beautiful days and evenings in the city of love. Despite the corona times. You always discover something new that you haven't seen before. And it is always a pleasure to sit in one of the thousands of small or large street cafes with a view of the pedestrians and the traffic. Look, observe, enjoy, be nasty. What could be better ?? !!